Born and raised in the Cayman Islands,
​
John Reno Jackson is a interdisciplinary artist based currently in Grand Cayman. He attended foundational courses in painting and drawing at the Art Academy London in 2015 and received mentorship from TURPS Correspondence Course in 2020-2022.

Since then he has continued his exploration with multimedia through a series of works made interpreting themes such as migration, isolation and identity. Jackson‘s works interlace ideas in multiple narratives drawn from current and historical situations within the Cayman Islands and the region. His works deal with the concepts and baggage of both subjective recollections and ongoing social situations.
The subject matter engages with Caribbean life in an illusory manner.
​
He has used multiple different materials and methods to create his work: from traditional Caymanian craft materials such as Silver Thatch rope to found objects such as fabrics, dirt, or old televisions.
The artist looks to explore the ideas of our self-imposed value to objects versus the object's own identity; The interrogation into artwork possessing its own narrative through its own endured experience. The artist has started to explore the placement of artwork in nature to allow the art itself to be affected not only by other humans, but also by nature.
Jackson’s primary practice however is painting. He paints in layers, hovering in the space between representational and abstract. Using an imagined palette, borderline naïve and entirely intuitive. Bright bold colours and exaggerated forms. Using this rich colour palette to help define the sense of illusion, to further amplify the forms and push the representational aspects further into the grey area of abstraction.

Jackson believes that painting is a response to the environment around you. The feelings and emotions, whether conscious or subconscious, will be compartmentalised into the painting. By pairing a painting with a found object, photograph of something from the environment; or placing the work itself in a natural environment, Jackson looks to grow and develop the narrative in the painting itself.
The artists inspirations come from political arguments, social hierarchies, the flickering neon light at a bar late at night, the patterns of traditional quilts, and the love and fruit cake of an elderly relative. All the things around us impact the way we see the world and the art in our lives must speak to these things, whether indirectly or adamantly.
​
​He is currently developing work that is based around: compositions that deal with digital collage, the process and manipulation of film-photography based portraits, abstracting photo imagery through form/colour coordination and collage, the presentation, placement and atmosphere of artwork, and the incorporation and identification of found materials.

Jackson's works have been acquired by the National Gallery of the Cayman Islands for their permanent collection.

He currently lives and works in Grand Cayman and is a full-time painter, photographer, performer, sculptor, and set designer. 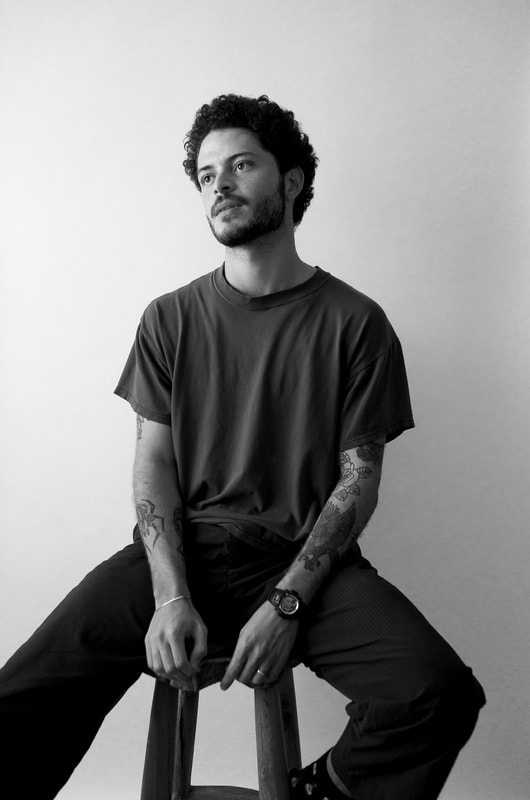